The poles led us over, and across.

And on the other side, the lake awaited.

Once I saw it, all the awful climbing and clambering and sucking mud and hunting for yellow and aching feet and tired muscles subsided into total irrelevance. I felt overcome by a surge of heedless joy and a single, overriding desire.

I may actually have in fact been glowing, it was so sublime 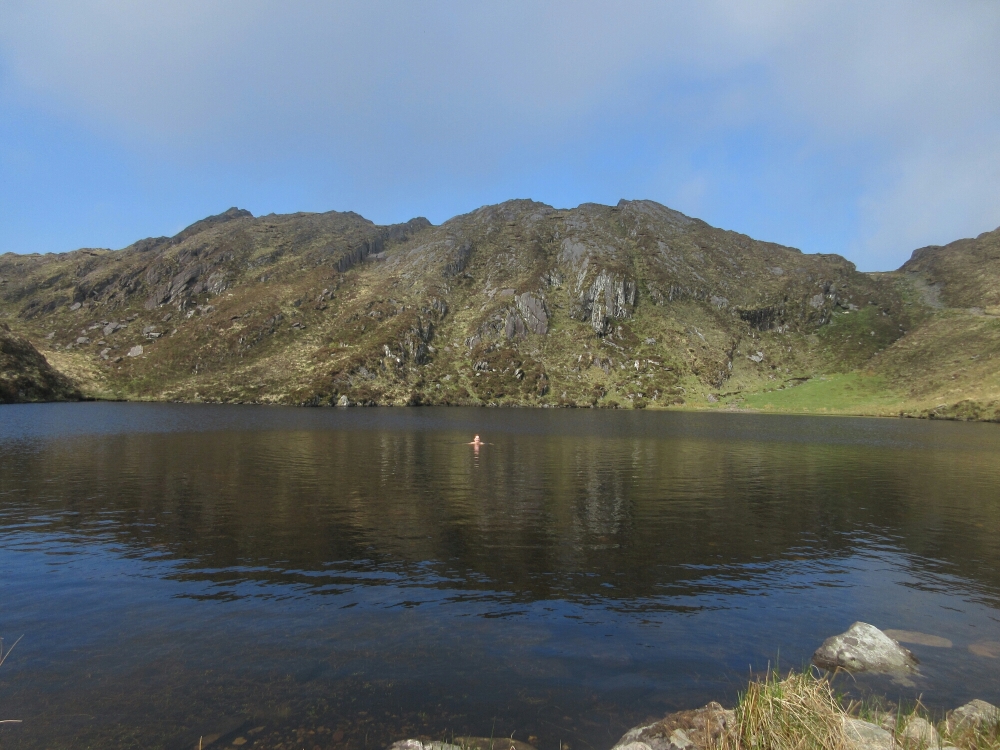 In a concerted effort of cunning and persuasion, Carl got me to come back out of the water and, once again, not force him to explain to everyone back home why it was I had vanished into the wilds of Ireland.

Friend/killjoy. Wouldn’t YOU want to live there too?

The stream that nourishes this peerless place

We clambered up yet another hill, through yet another draw, and I straggled behind, unwilling to leave the lake. But up ahead of me, Carl spoke up. I turned to see him standing on a rock, his hand outstretched, his face rapt.

“Holy shit. I just reached up and touched the clouds.”

I looked ahead and saw them streaming through the crease in the mountains, feathery soft around us. As I climbed up to join him, I could feel them too. They brushed cool against the skin of my face, a whisper of a kiss.

And then we walked over the ridge and gasped.

In the time I’d spent bathing in the lake, the sun had lowered in the sky. As we crossed the ridge, it spilled golden light and shadows across the landscape. The valleys and mountains ahead sprawled out before us, luminous and otherworldly. These photos cannot begin to do the merest hint of justice, but we stared, and couldn’t help but try again and again. I felt tears standing in my eyes. 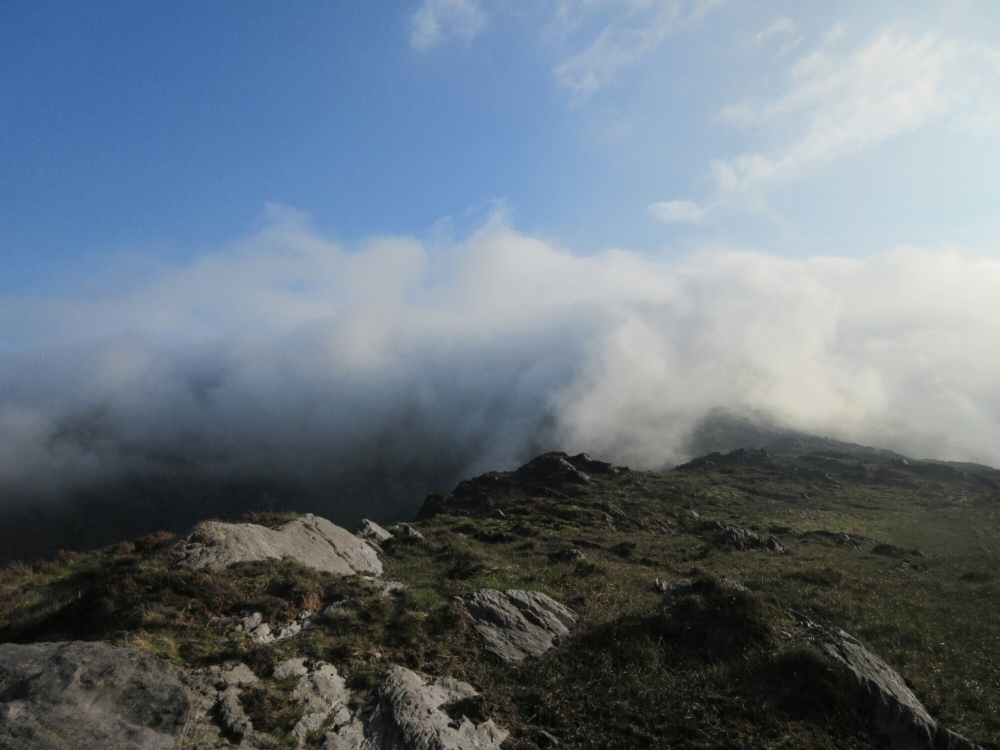 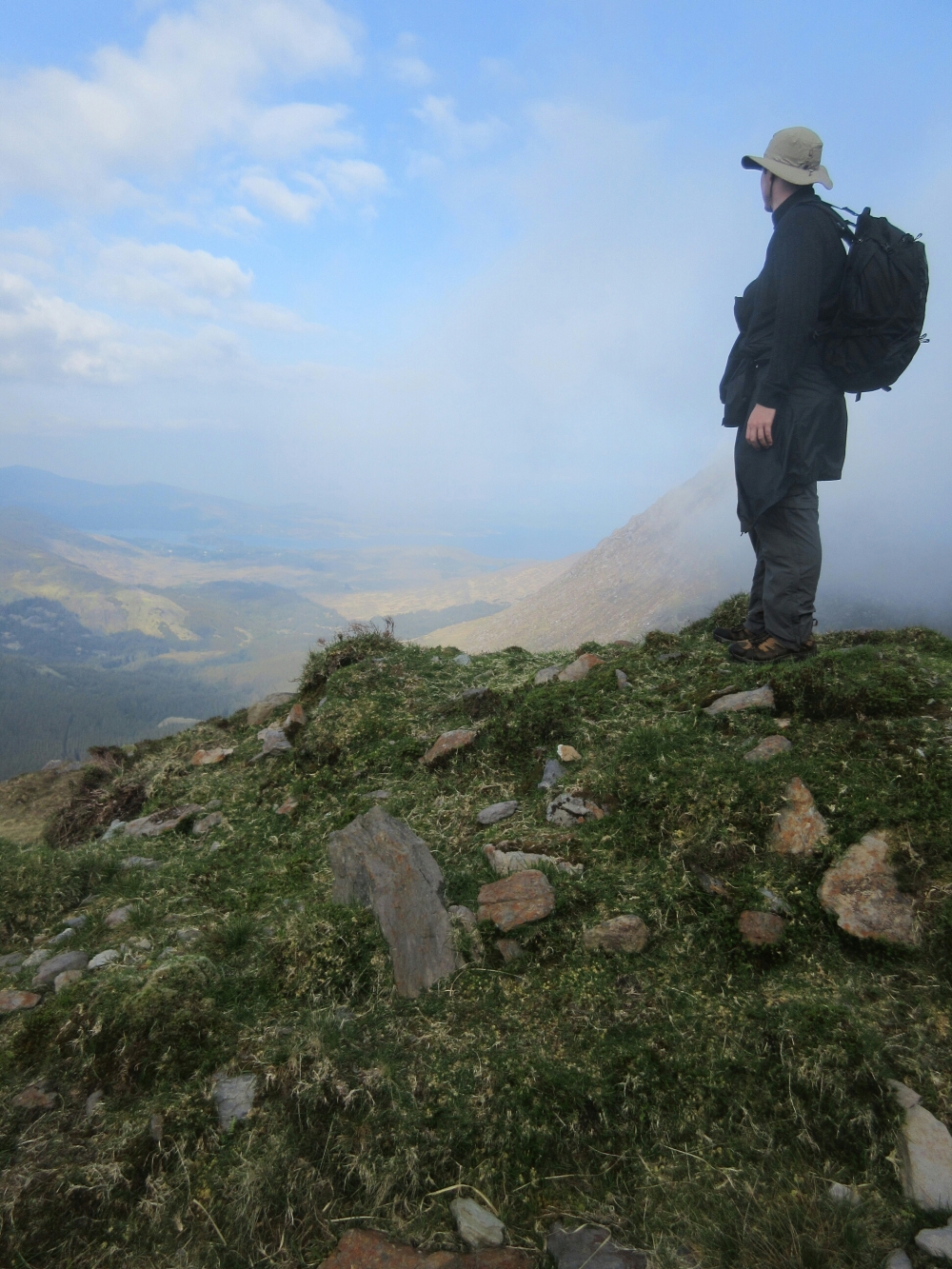 “That’s Arcadia down there, isn’t it,” Carl said, sounding dazed.

I did not argue.

We walked through the midst of this waking dream, overcome. Minutes stretched out and we were still there, still in it, still surrounded by beauty we had carried ourselves to with our own tired, wonderful feet.

“It’s like,” I said, drunk on the world around us, “Most of the time, when we experience awe, it’s a just for a moment. Like a sip of water. But here… it’s like we’re swimming in a lake of awe.”

Yes, the scenery was sufficient to inspire that statement without even the merest hint of irony. Drunk is, perhaps, the proper term.

I came by this lens flare 100% honestly

We walked down, and down, ready to follow the path all the way into that forest waiting at the base and to see what mysteries might wait therein.

But then we realized that we had another mountain to climb first. That one. Right there. 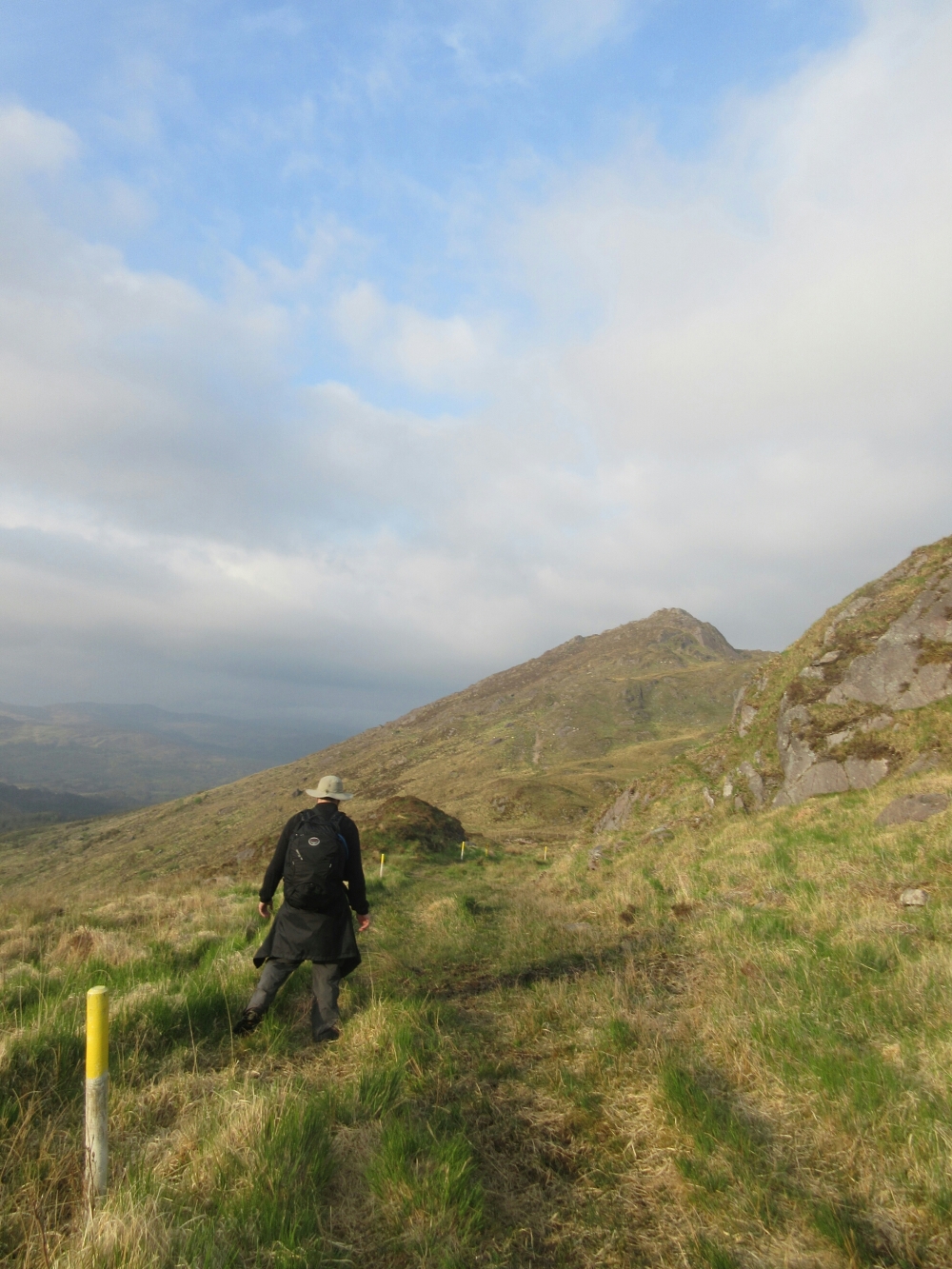 “You have to be fucking kidding me,” I exclaimed, suddenly remembering the ache in my calves, the stiffness in my feet.

But we did it. 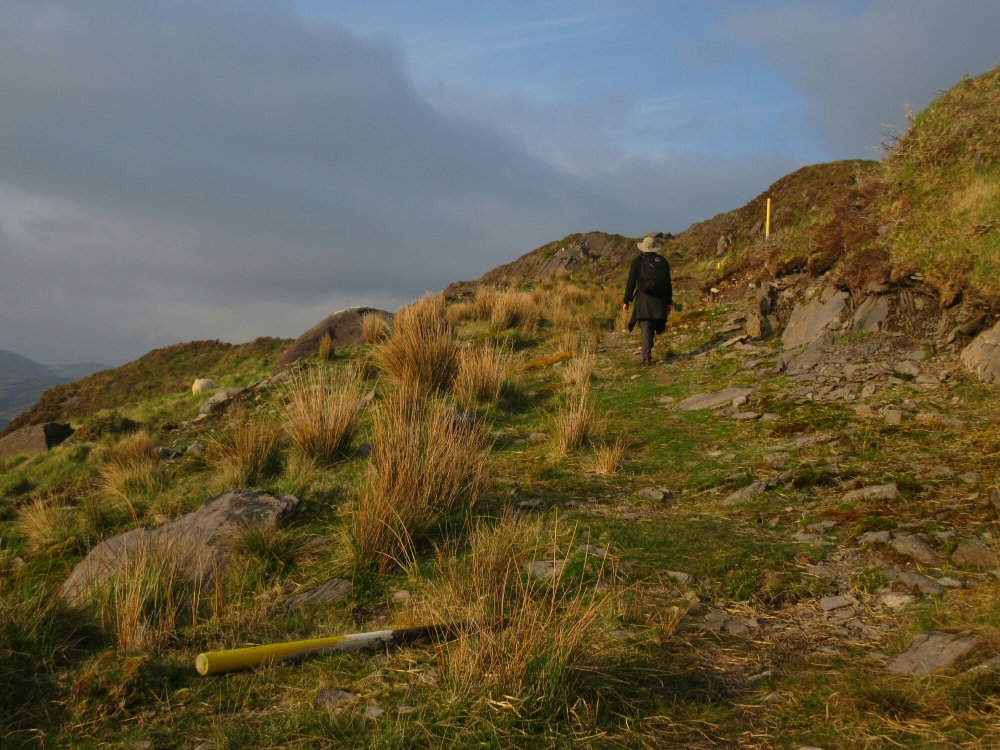 That fallen post aptly representing our energy at this point 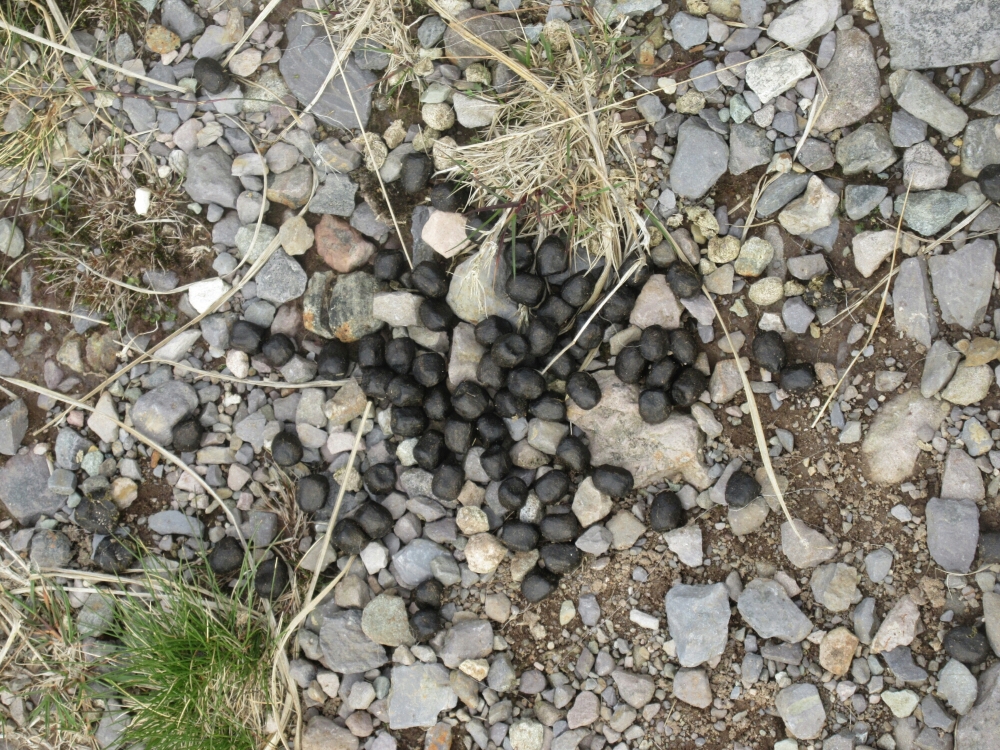 Dear reader, if you walk this trail, just realize you will step on and around more sheep shit than you can possibly imagine. It helps mark the path along with the yellow posts.

We oscillated between the residual awe and a growing awareness that having light like this meant there was a good chance we would still be walking after dark. With nothing for it, we continued our descent, distracted at times by the darkening but still glorious scenery.

However, in the realm of “things we didn’t photograph because we were concerned about our personal safety”, a rather irritable ram was standing watch over the rock of lambs. When we hesitated in our passage long enough to take pictures, he started approaching us, bleating with extreme irritation and making threatening gestures with those nice horns on his head. As our current path would have taken us right next to the lamb-rock and right THROUGH the ram, we skirted around through some tall grasses and uneven terrain, checking behind us frequently. He followed us for several minutes, until he felt reasonably assured that we were going to keep moving, and eventually turned back to the rather cute collection of nervous babies remaining behind.

Slightly nerve-wracked but overall not too much worse for wear, we continued our descent…

We’ve got to get down there, for a start…

Almost there… (those are some of the farmhouses from two pictures up!)

Oh, and now that you’re down… d’you remember that forest you saw from up above?

The one Carl referred to as Arcadia?

You’re going to be walking through that now.

At twilight. (This is a stream, not the path… but you get the idea.)

It all began to get a bit blurry… 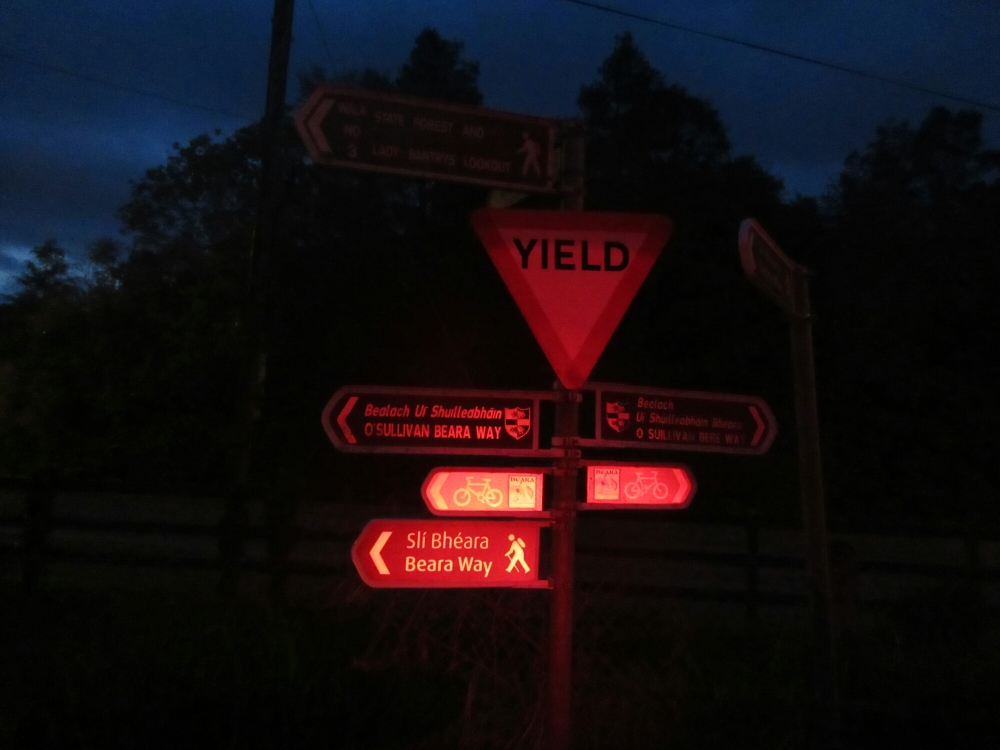 And encountered our final animals of the day – a pair of cats. (here shown the second – of course, a black cat)

But we survived, and reached our hotel, and even were able to order Chinese takeout (again…) before the restaurant closed – though I am pretty sure it was about to until the waiter saw our sad, sad faces and decided to let us place once last order.

We limped back to our room, inhaled our food, and made ready to rest.

And then… I spent the next couple of hours experiencing the most serious foot pain I have ever endured. You know those scenes in the superhero origin movies, where they get their superhero power through some ordeal that culminates in screamworthy agony as the radioactive spider bite or experimental drugs or parental death does its work?

Yeah, I’m hoping I get the superpower out of that particular experience.

But you know what? Even in the middle of it, as I lay curled and shaking on the bed with Carl keeping concerned vigil, I managed to say, and mean, the words, “I would do it again.”

For everything I saw? To swim in a lake of awe?

Yes. I would do it again.