Today we began by remedying an oversight of the past few days; namely visiting the lovely little island monastery that sits just down the street from where we stayed. (in our defense, our shoes were wet literally all day yesterday, entrusted to the care of the hotel staff for a long slow dry, so going outside seemed like a poor choice) 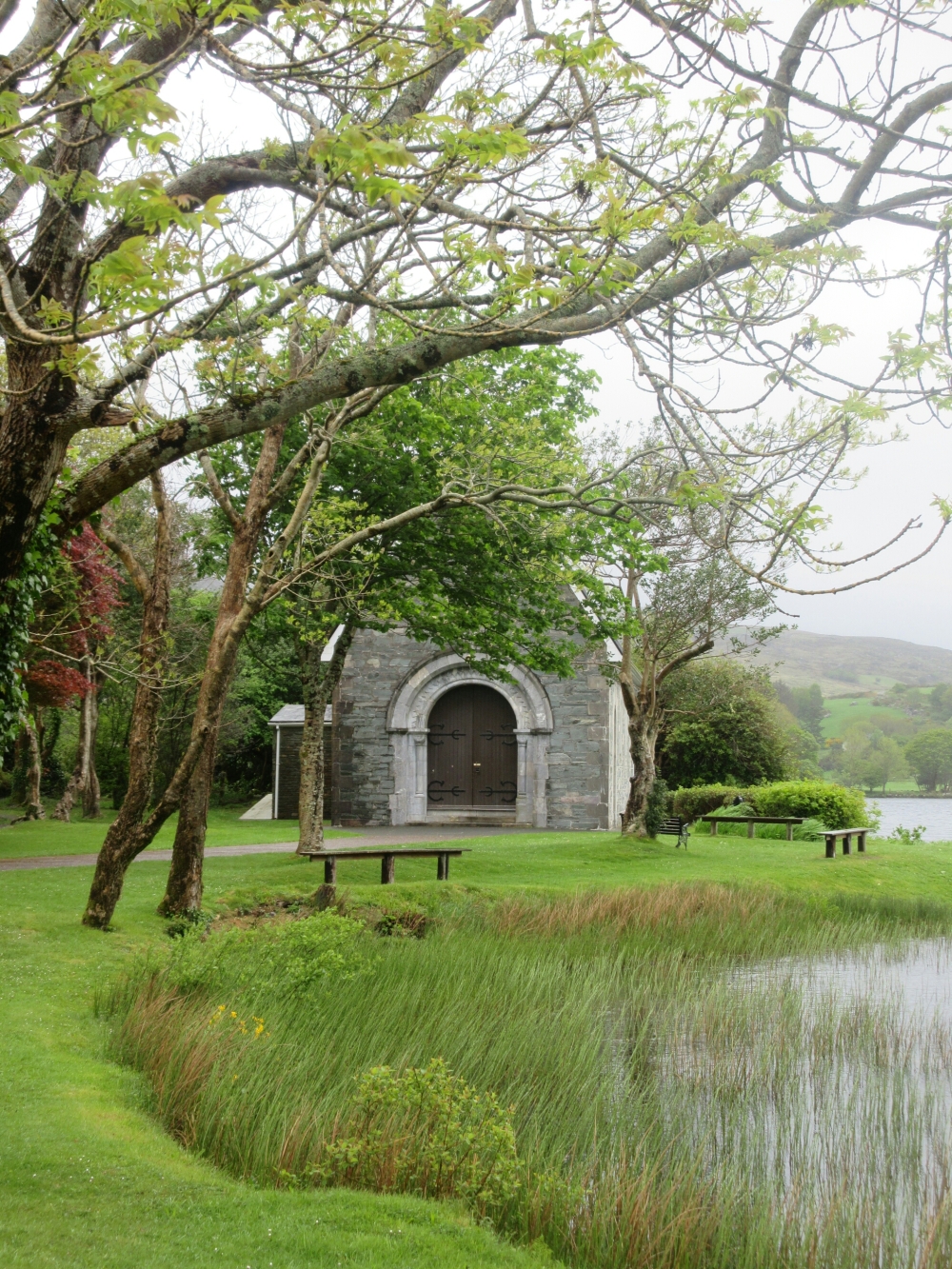 It really is a picture perfect place. That building is new; alongside it sits a much older one

Inside the ancient monastery. Those dark openings are very small living quarters for monks, I am given to understand

St. Finbarre was the fellow whose cathedral I visited on my first day in Cork. Apparently he was here too…

Knowiing we needed to get on the road, we bade farewell to this particular spot of sacred ground and got on our way. 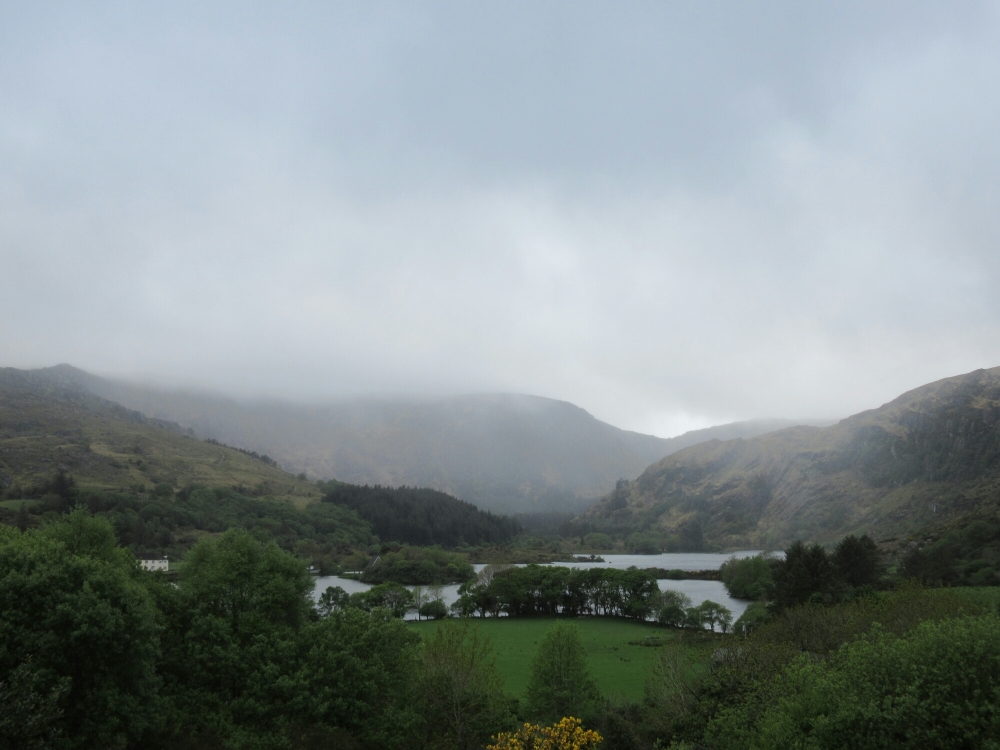 Goodbye Gougane Barra – you were a wonderful sanctuary 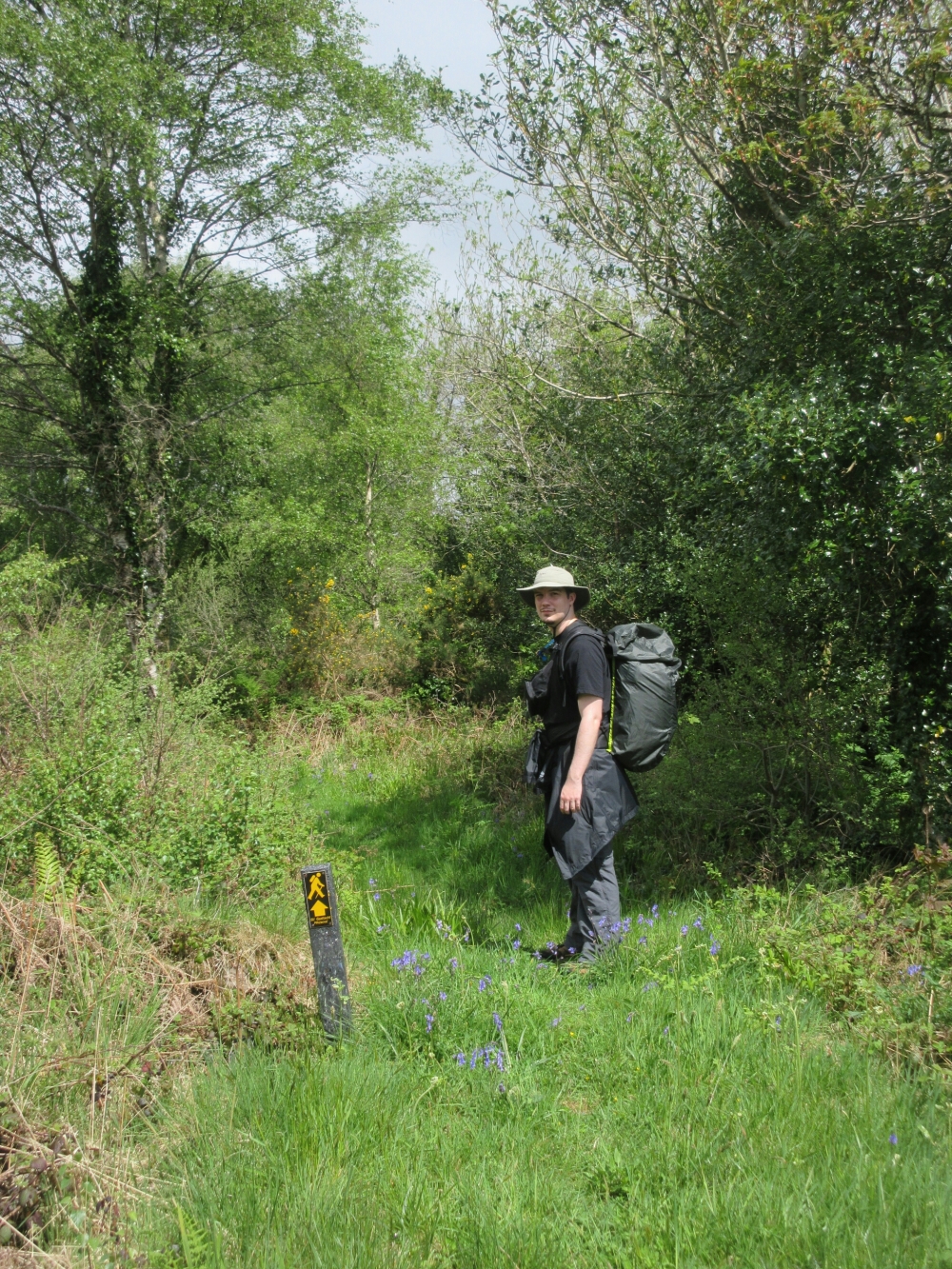 A slightly unconventional location for a little yellow man, at least so far. However, he lead us well…

Into what I might describe as pastoral riparian heaven 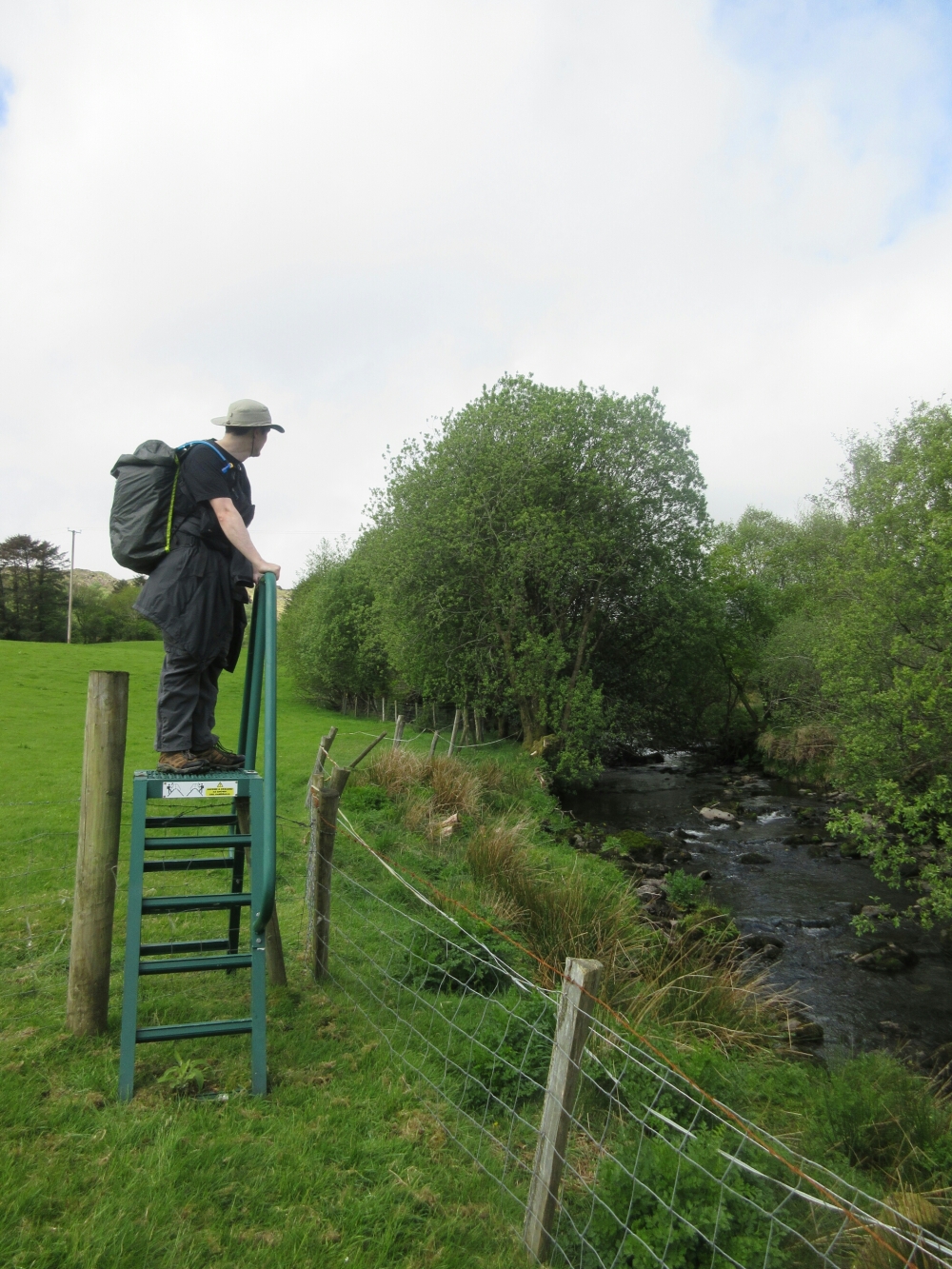 I think this is the River Lee, which if I am understanding my watersheds properly is the very same river I stayed alongside in Cork City… so lots of things coming full circle here 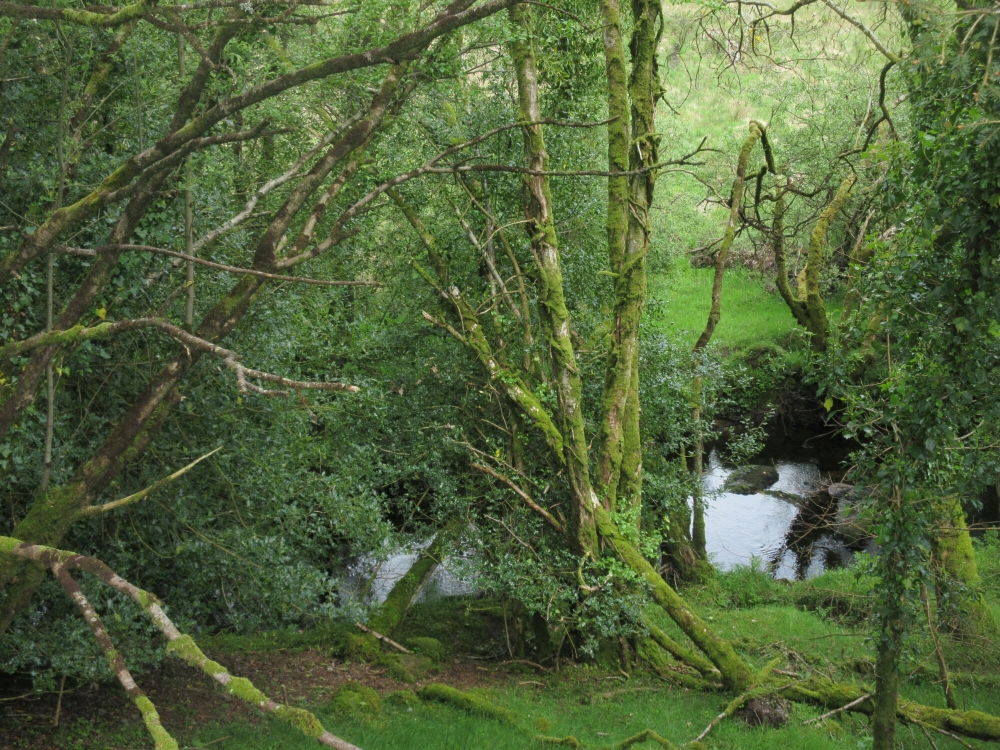 At one point as we walked through the idyllic fields alongside this river, Carl turned to me and said, “You know, if the watchword for that day in the mountains was awe… I think today’s so far would be serenity.”

Even after leaving the river, this theme continued.

Some sublime spring gardening along this country road

That green looks so fake but it is seriously actually that color. We started joking that someone had left the color saturation turned way up when Ireland’s palette was being set

Bluebells beside the mossy stones 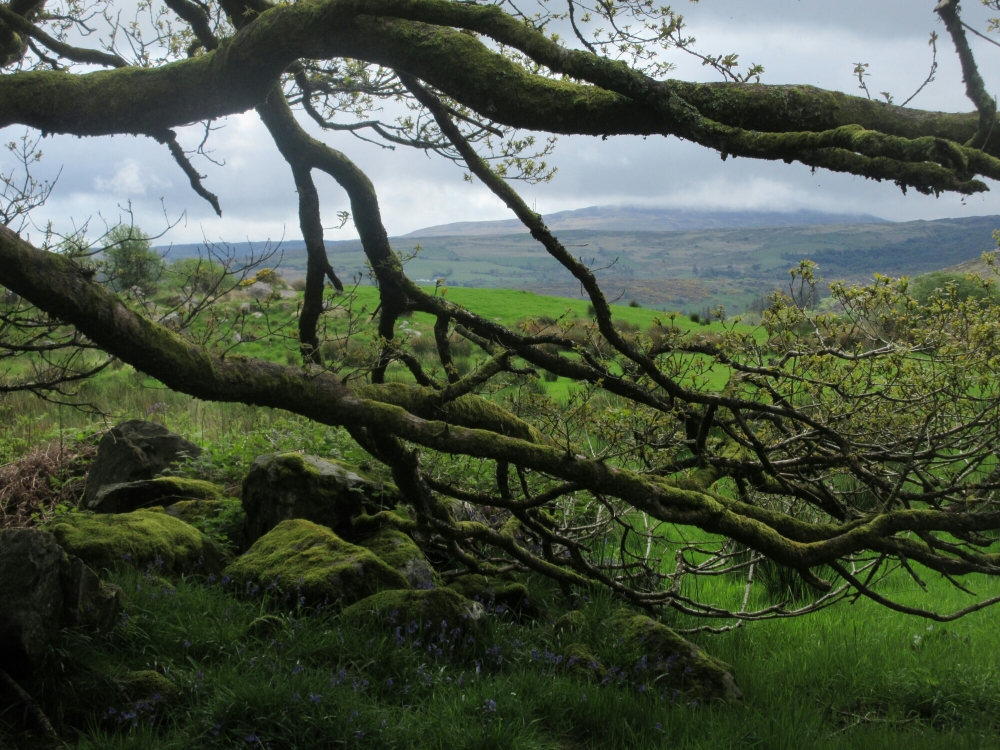 Back through the branches

Okay, that is… a whole lot of sheep right there

Which we summarily drove before us, feeling rather guilty as they bleated their extreme annoyance at our impertinent intrusion

It wasn’t long after the sheep that we reached the Eochras Church – a landmark I had been hoping to cross paths with all morning and one I actually thought we had missed. (the maps confused us somewhat.)

You see, the Beara Breifne Way is meant to follow the footsteps of Donal Cam O’Sullivan and his followers. But it’s been over 400 years – a rather eventful 400 years, involving a great deal of turbulence in land ownership and usage, among many other things – since that happened. In piecing together this walk, the organizers had to deal with all manner of land rights and bargaining and scenic concerns and existing roads and available services and so on and so forth. I’m under no illusion that I’ve been following Donal Cam’s footsteps exactly. Hell, he didn’t even start where I did – when his march began he’d been hiding out in the mountains for 6 months after the fall of Dunboy, running a guerrilla campaign against the English. It was only when the English forces managed to capture and kill most of the wild flock he and his men had been living off of that he was forced into the crazy plan of hauling ass across Ireland in the middle of winter. He actually probably set out from closer to Glengarriff than Castletownbere.

This was the first place that I know he actually was. This church – which was ruins even at the time – was his first camping spot. Which, guys, means he walked from where I started three days back on the trail to here in one undoubtedly hellish day. Apparently he chose to camp on sacred ground whenever possible – both for whatever protection it offered in terms of the locals being unwilling to attack there, and for whatever inspiration it could offer his party.

I spent a good while soaking in the weight of the place, admiring the beauty and listening to the wind and whatever it might be able to tell me that the little plaque nearby could not.

Blue sky through the branches

From the interior. Its hard to imagine nearly 1000 people packed in and around this place… 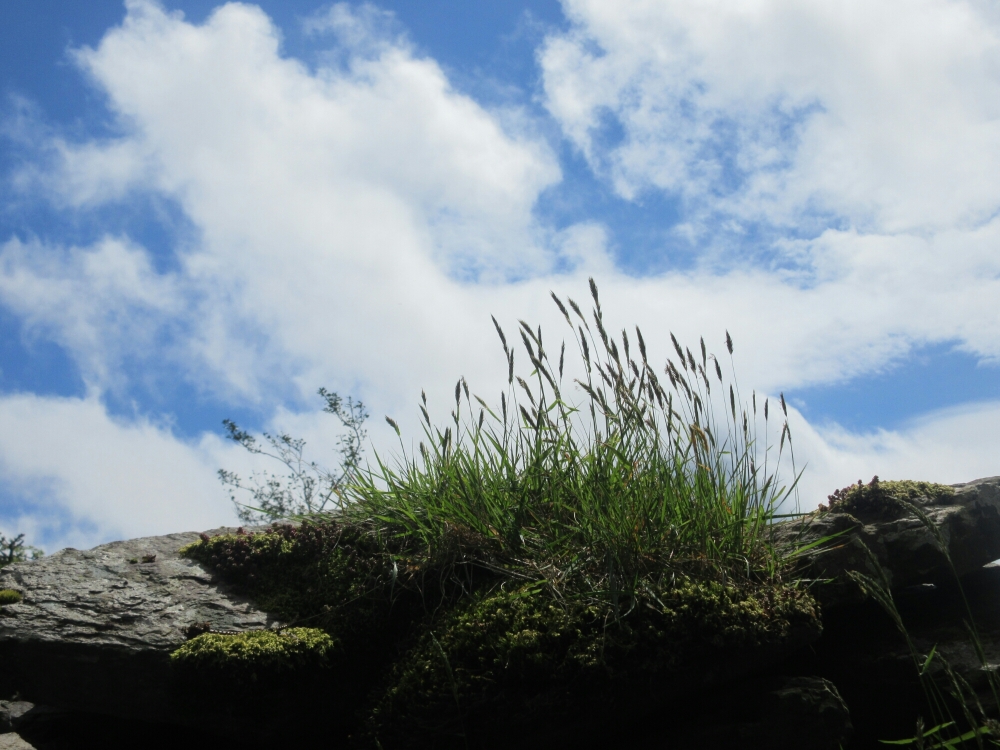 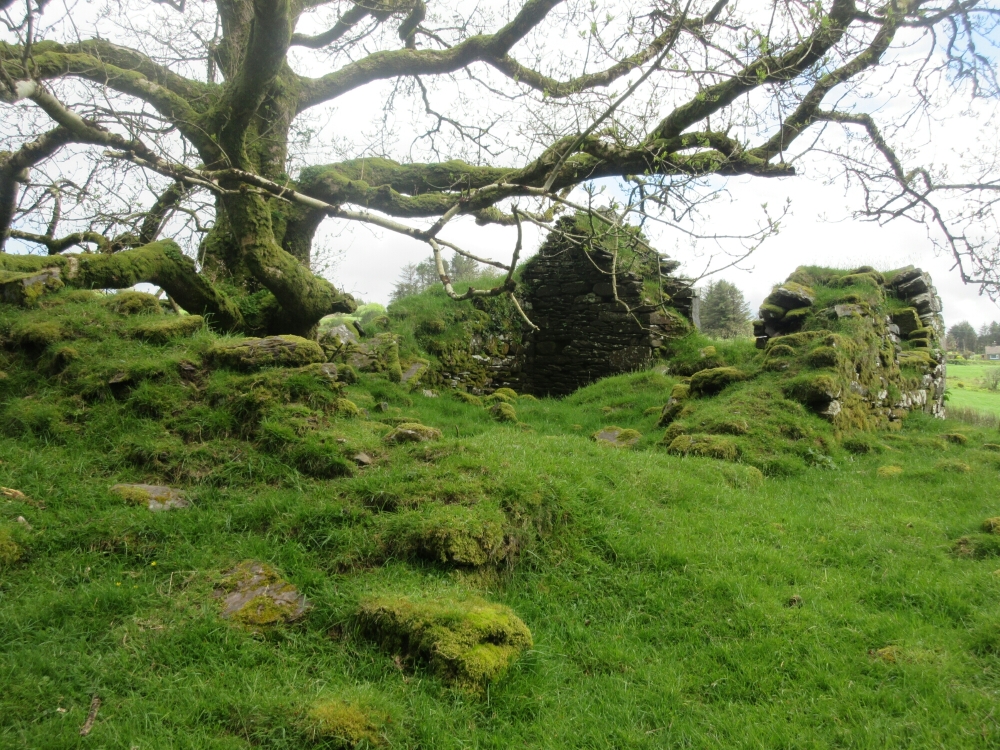 It made me think of Dunboy, and how much it had changed in even the few years since I had been there last. 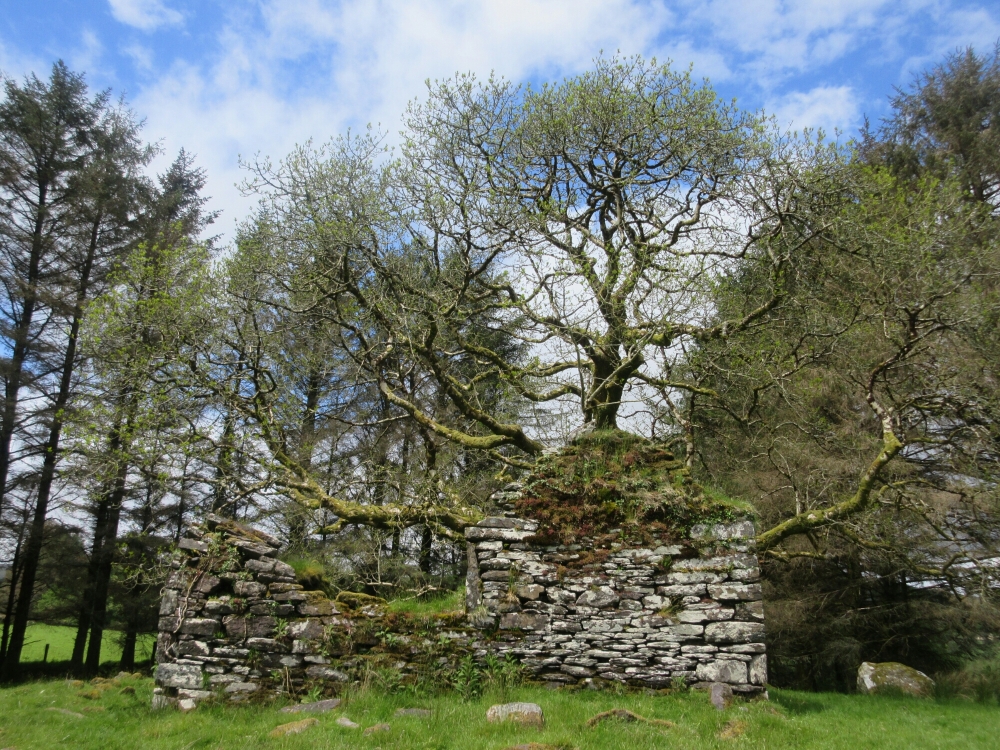 And yet it still stood; as this place did too.

Carl waited patiently until I finally felt ready to move on, and we set out once more… (continued in next post)