Okay, so yesterday I made some minorly irritable noises when I first mentioned the Duhallow Way section of the Beara Breifne Way. Let me clarify that a bit. (this next few paragraphs are probably only of interest to others thinking of doing this walk, sorry y’all, but I gotta get this off my chest, ok?)

So you’d think, from some of the press, that the Beara Breifne Way is capital D Done. After all, as I may have in fact mentioned earlier in this blog, the Taoiseach (Irish prime minister, pronouced very approximately as TAY-shuck) did a whole press conference “launching” it and all, way back in 2013. But if you dig a bit deeper you start to notice that the different sections have varying levels of information available about them, and you start to wonder if maybe some of those sections have slightly different definitions of what “done” means.

The Duhallow/North Cork Way is one of the ones marked in my research spreadsheet as “sketchy”.

Sometimes this section is also called the North Cork Way – however, literally NO sign that I encountered during this bit referred to at is such. They all refer to it as Duhallow. So it’s all a bit of a mess. The waymarking is also a bit weirder/spottier, and the routing… well. We’ll get to the routing.

But first, let’s talk about one section of this route that was not at all done in 2013 when the route was announced – and wasn’t done even last year. I only knew it was finished now from the word of a few locals.

That would be the bridge over the Blackwater, one of the first really major river crossings the O’Sullivans had to make. For quite some time, apparently, you had to bus around and it was a pain and not accurate to the route or anything like that. (or you had to be hardcore and ford the river the old fashioned way like the O’Sullivans did, which would be heartily not recommended) But barely before I arrived – Google Maps still shows an empty ford! The bridge was completed.

Kathleen, standing on this wondrous and new span

A view down the river

Not exactly a casual wading sort of river

I admit, I wasn’t entirely confident the bridge would be there until we actually arrived and walked over it. It felt like a good omen to start the day with.

I mean, don’t get me wrong, we had a few pleasant sights to enjoy along the way.

But the routing for this part. Is roads, guys.

Nearly this entire section of the route – about 25km – is on paved roads.

LOL GUESS WHAT NOW HEYYYY IT’S ROADS (Also, note Kathleen out in front in all three of these pictures, which is an accurate representation – I told you she was way more hardcore than me)

My primary footwear for this trip is hiking boots, because I kind of imagined I was going to be doing a lot of hiking. This assumption was, up to this point, a fairly valid one – there were bits of road, sure, but broken up by trails and other surfaces that don’t completely suck to walk on.

But not this part.

We had one good respite, at a pub in Cloonbannin Crossing – near where N72 and Drominagh Road intersect. At Curtin’s Pub, we peered in through the door, and though they were closed one of the proprietors saw our sad faces through the glass and let us in. We sipped a glass of cider, sat down, rested our feet, and enjoyed a bit of conversation.

The pub, named after Australia’s prime minister during World War II, had been in the family for some time, with the brother of the woman who greeted us the main owner at this point. She sat with us and shared a bit of history, both her own and the place. She’d spent some years in Syria, living in Damascus before things got bad – her voice sounded wistful as she spoke of it. Once on the corner across the way had stood a castle, but it had been long ago quarried for stones, and now made up many of the buildings in town. My mind rolled between the two stories, hers and that of the castle, wondering at the relationship between them.

Ireland had changed, she said. Once this town had held stores, B&Bs, various thriving businesses. But the recession and EU regulations had changed that. She felt some openness, some part of the old Irish spirit had been lost in the transition. Sitting across from her in the dim lit pub, feeling my feet unknot as she spoke candidly with us, I felt that spirit could not be completely gone.

Soon enough, though, we had to move on. My feet felt better for a little while, but not long. I snacked on Ibuprofin as the pain worsened again, and tried to ignore the increasing rage emitting from my shoes even as it felt like it ought to have become visible as little pain-rays, like when somebody gets punched in a comic book. 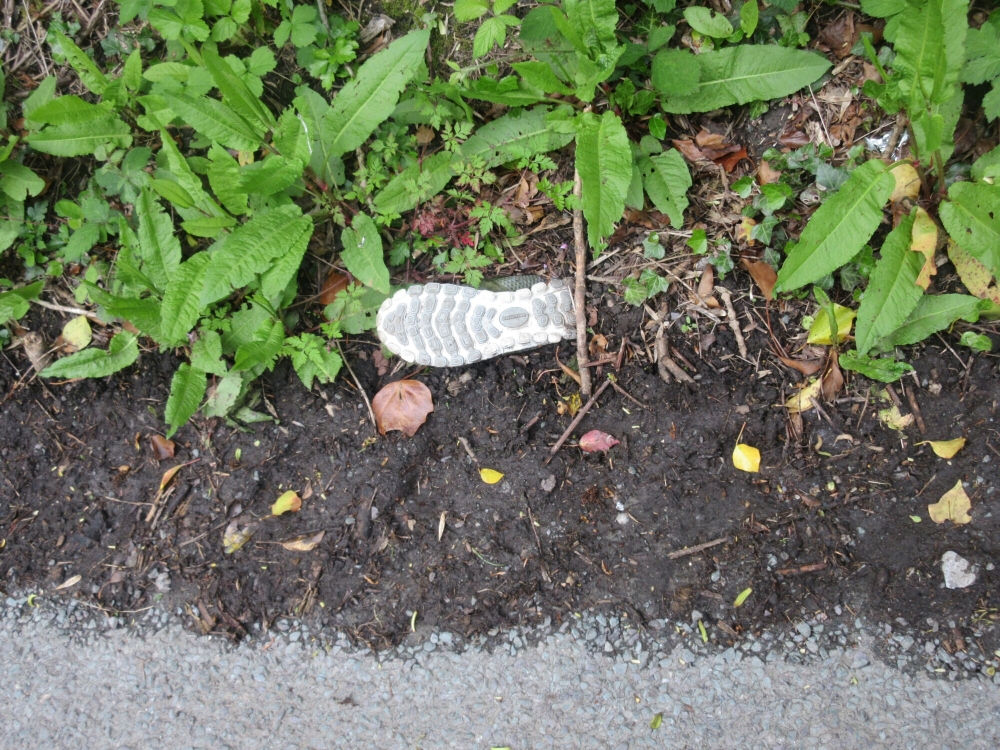 And the final bit of insult for your maybe-not-injury-but-feels-that-way, after kilometer after kilometer, hour after hour, of pavement slowly eroding all the joy out of your day?

Right near the end, suddenly things start getting pretty. 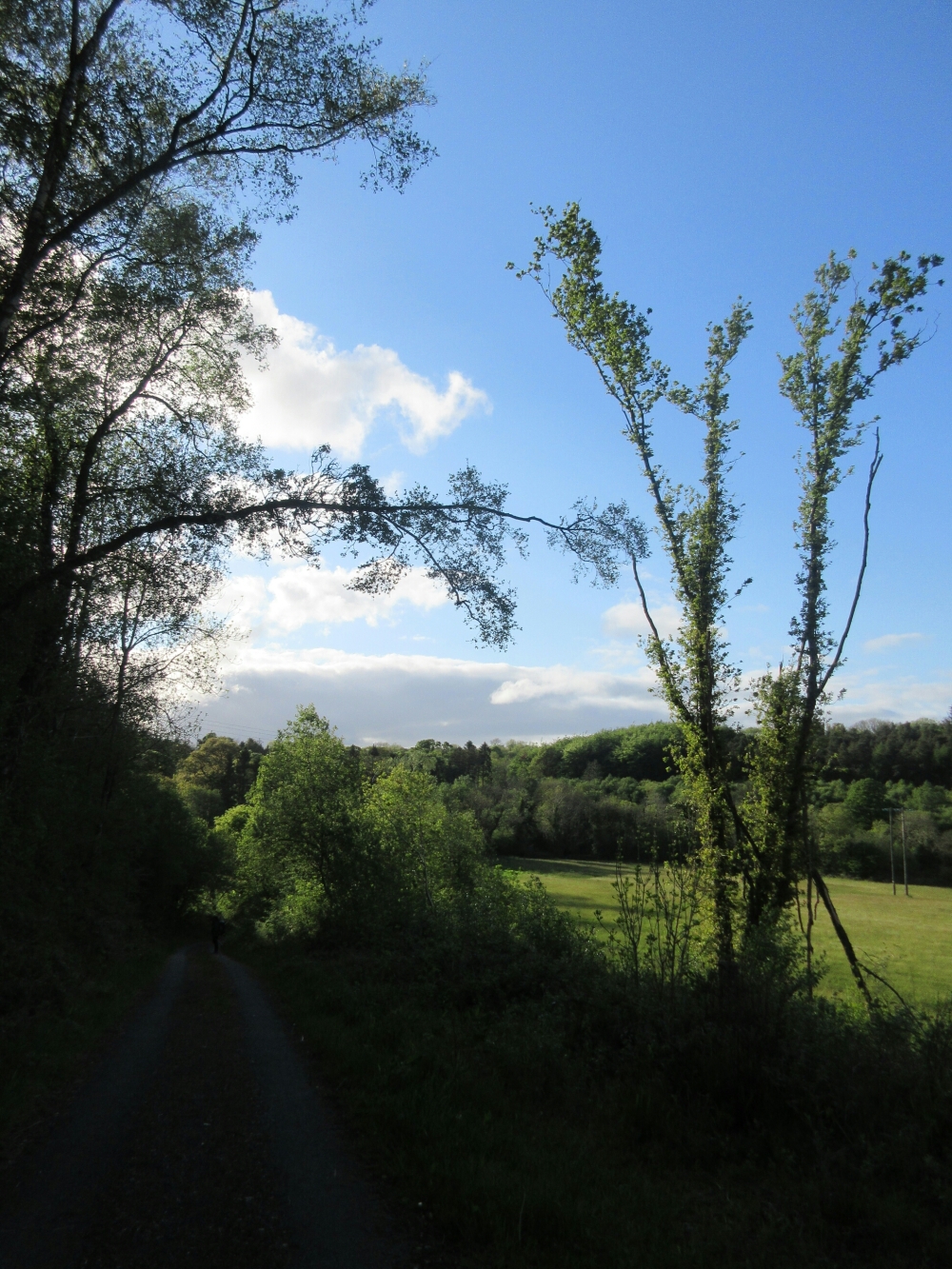 Wait what now you have to be kidding me 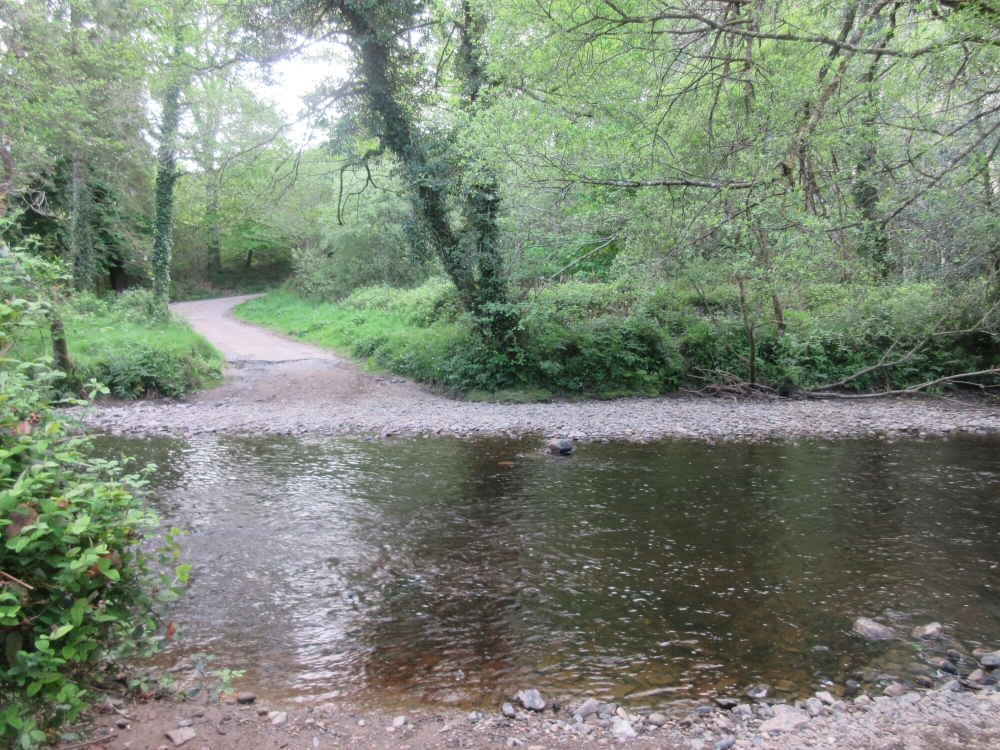 And then the path that was just starting to get nice dumps you right on the bank of the Dalua River.

At this point, I am not gonna lie, I was cranky enough that I just assumed that, of course this is what is happening now, we have to ford a river after all. I mean, the road led us right here and there is is on the other side. It seemed like the perfect last “screw you” from the day’s walk, some kind of awful bookend to the complete bridge we crossed at the start.

But as Kathleen swapped her shoes in anticipation of the wading ahead, I had a moment of doubt. I inched my way out as far as I could without going in the water and looked both ways… annnnnnd there it was.

Yes, there is a bridge you dorks

Protip: when doing this section you must leave the proper looking trail and slip through a gate to go in a nonobvious direction to reach the bridge

And the park on the far side of it? Was beautiful, even to my fatigued and irate eyes. 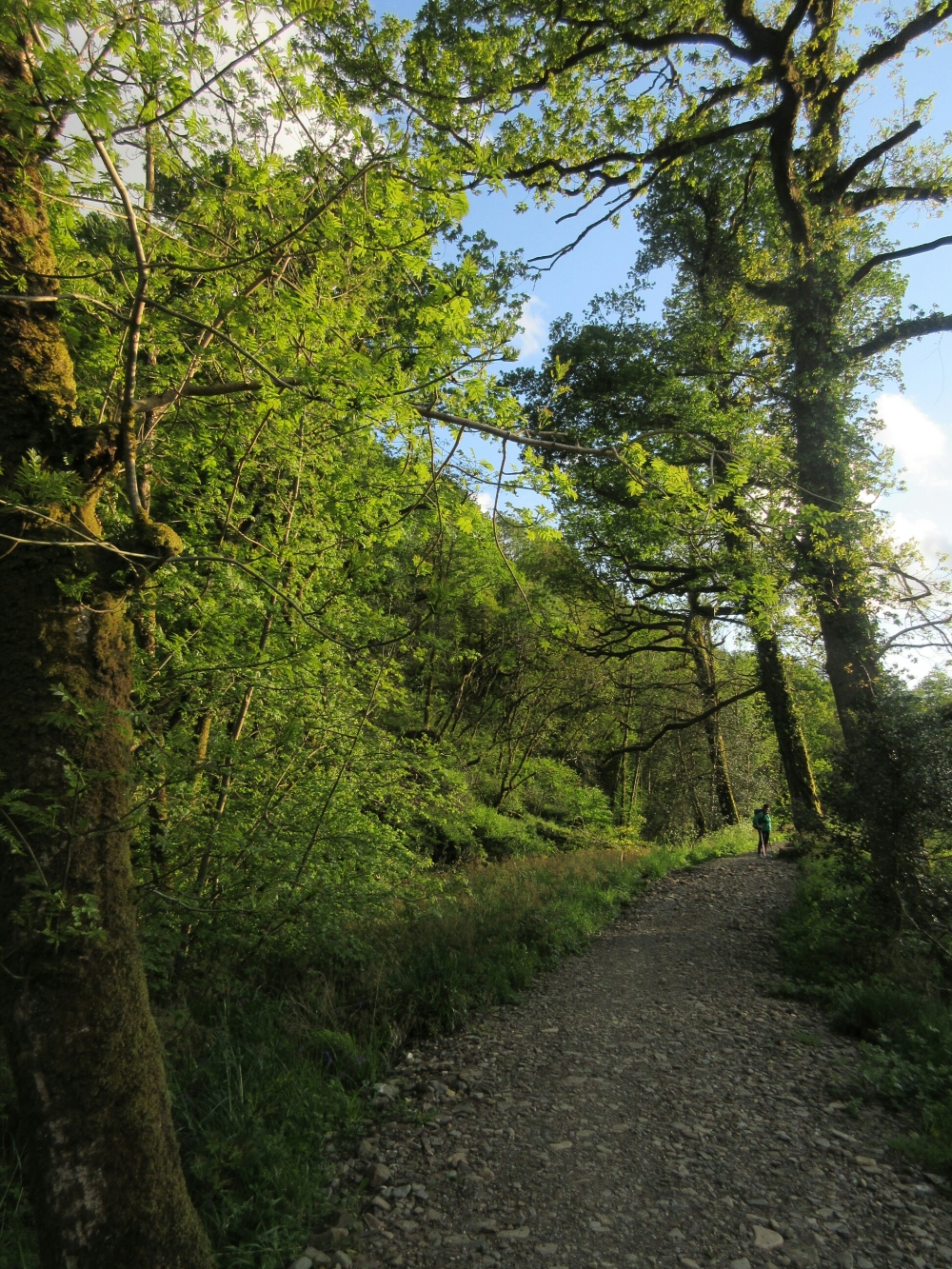 As we walked (my gait edging in the direction of a hobble at this point), we encountered a local gent. Kathleen asked him how far we had to Newmarket.

“You’re about an hour and a half out,” he said, eyeing us and me in particular with mild concern. “Would you like a lift?”

I looked at Kathleen, game and energetic as ever. I forced a smile. “No, we’re fine, thanks.” I reflected as he walked off the the 90 minute estimate was probably for people with intact feet.

A few minutes later we ran into another couple, and Kathleen asked them the same question. “Its only a couple of miles now,” they said affably, but I could see them, too, giving me a look. “We’d be happy to give you a lift.”

Having said no once, I felt I ought to keep up the good front. However, perhaps less convinced by my no doubt faintly alarming semi-grin, they exchanged glances and said, “Well, if you get through the woods and you need a lift the rest of the way into town or to your B&B, we drive a golden Jeep…” and they gave us directions to find their house. We parted affably and continued on our way.

Things continued to be lovely… 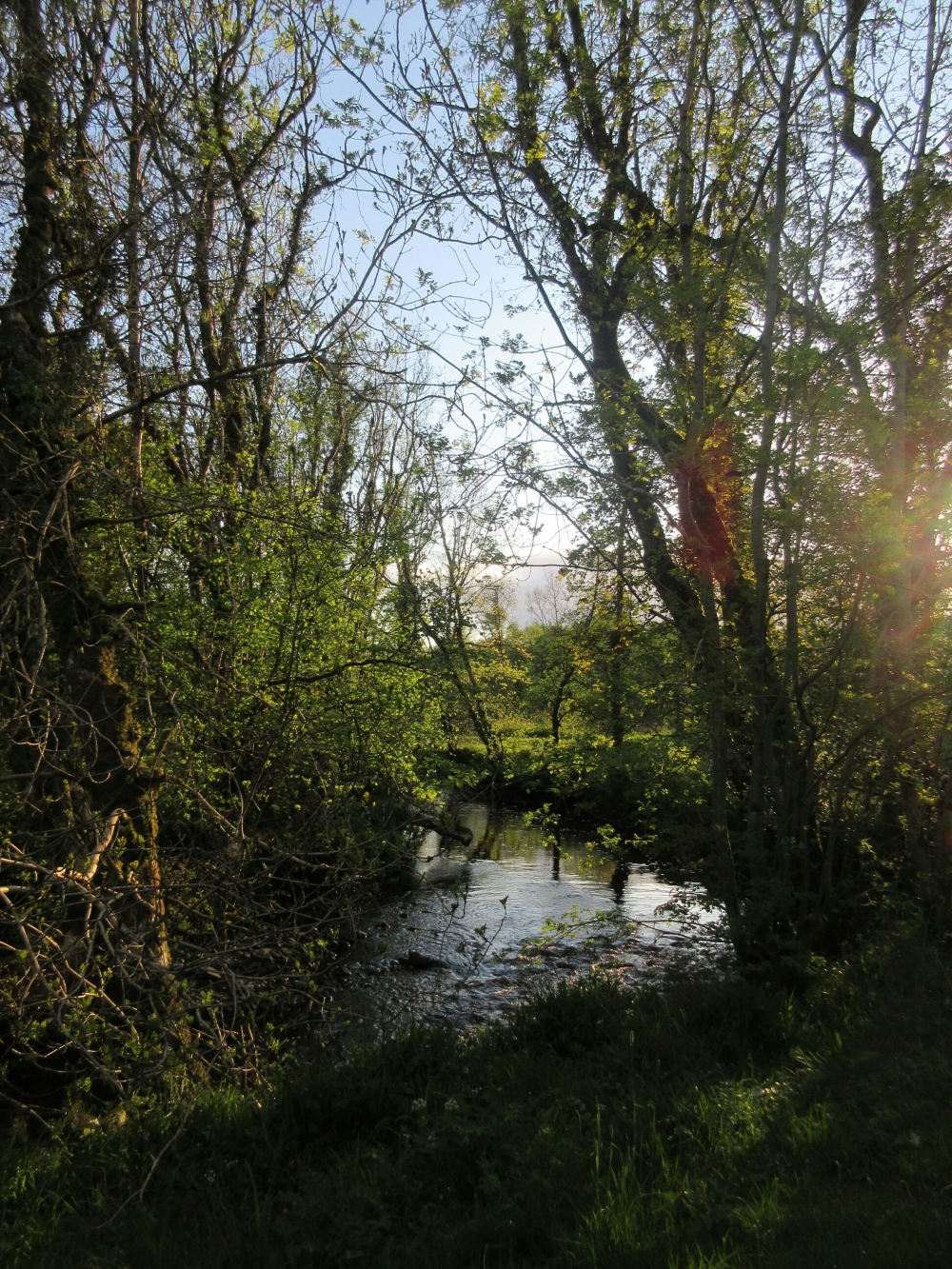 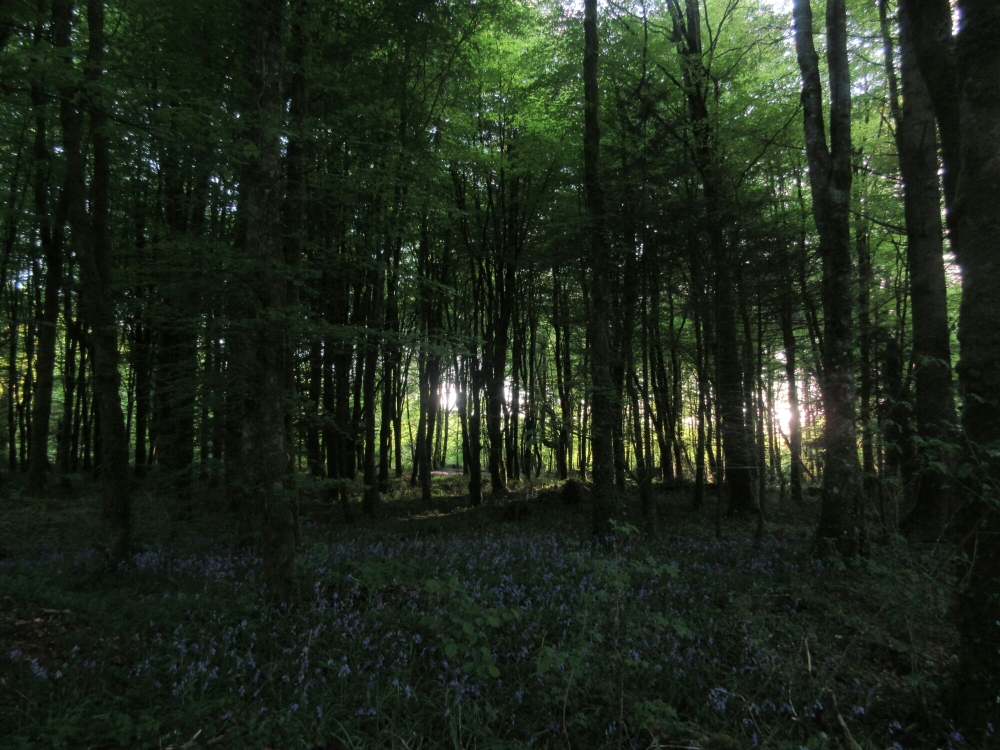 But as we kept moving, the pain in my feet got worse and worse. And at some point I lost the ability to hide how bad it was.

Kathleen moved to walk behind me, concerned I might injure myself as I limped on, but I remained stubbornly upright. The experience became gradually more surreal, as if some auteur filmmaker had cut together a horror film and an Irish nature documentary. I staggered through stunning landscapes, groaning audibly in a zombie-like fashion. My brain capacity dropped rapidly to the point where my conversational abiliities had atrophied completely, and yet I still stopped periodically, tears streaming down my face, to snap pictures of the beauty surrounding me. 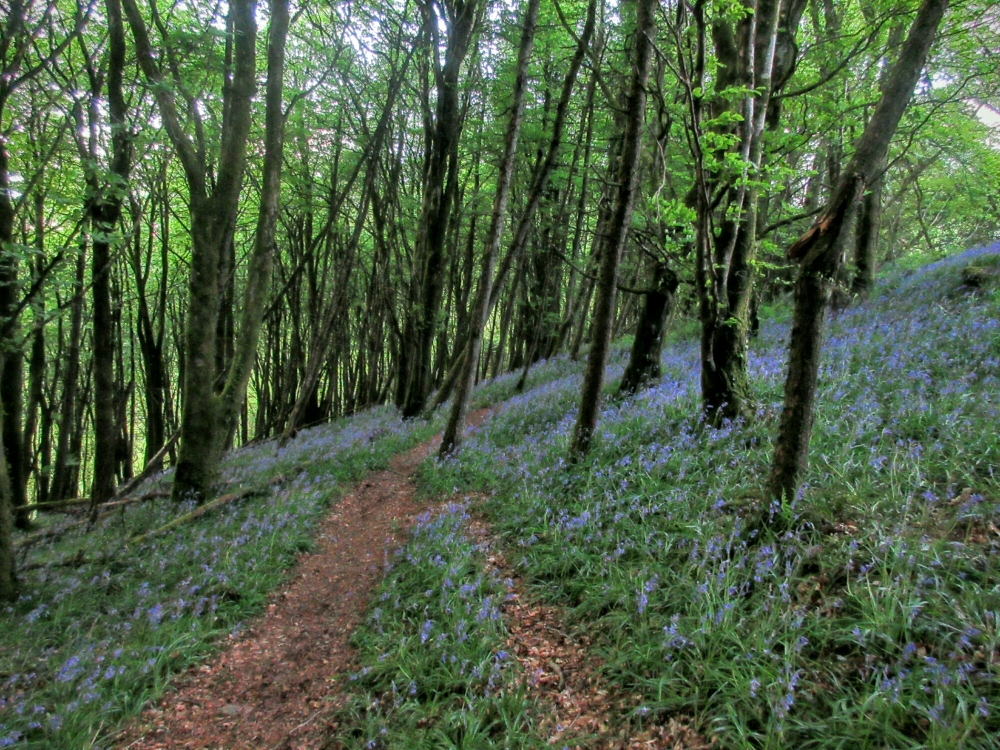 Finally we emerged from the woods onto the road. My earlier prideful dismissals of help had by this point softened (liquifying with my brains, perhaps), resulting in a much more… flexible state. I began fixating on the golden Jeep… I mean, doesn’t that sound rather mythical? Like a golden fleece, except way better in that it can convey you somewhere, without you having to use your own feet.

And so I stumbled on, looking, for what seemed like much longer than I imagine it actually was… until we spotted it.

We rushed to the door, by which I mean Kathleen went ahead and knocked and started explaining the circumstances as I zombie-walked my way up the drive.

They invited us in instantly, ushering me into a comfortable chair before I quite realized it had happened. My pack and poles lay abandoned as they bustled around, fixing tea, bringing a tub of warm water for my feet, a cup of water and some painkillers for the rest of me. Suddenly enfolded in warmest hospitality by people who we had met for five minutes just two hours ago, I began to remember that I was not in fact a zombie, but perhaps a person too.

As I sipped my tea and tried not to make too many disquieting pleasure-pain sounds at the way my feet felt soaking in the water, they offered us homemade rhubarb tart. I could have wept. It tasted like kindness, and springtime, and safety, and other things food has no business tasting of.

They chatted warmly with Kathleen as I slowly returned to myself. Their names were Conn and Brida (I hope I am spelling those right!) O’Shea, and they owned a clothing shop in town. No, it was no trouble at all. Oh, how lovely to hear we were doing the Beara Breifne Way. There was a local O’Sullivan who knew all about it and its history, I should meet him, his name was Raymond. Oh, of course we’ll phone the B&B and let them know we have you. Yes, we’ll take you out there in a bit, once you’ve rested a little more.

They gave me clean socks, and told me with gentle sternness not to think of putting my boots on, they’d pull the car right outside. No, don’t worry about bringing them back.

As they drove us to the B&B and pointed out their shop and the local pub and where that O’Sullivan historian lived, I mused on the astounding kindness that humanity is capable of towards one another, with no notice and no cause.

Then they dropped us at our B&B, waving a warm farewell. I staggered into my room, swallowed a few last pills to quiet my feet, and slept like the dead.