As the title says, this was my first day walking alone… since I began the Beara Breifne Way proper, I walked plenty alone before that, and also I wasn’t really alone, because Maurice was back with me after a few days of chillaxing as a sloth must do frequently.

But still. It was different.

I got a lift from my B&B in Ballyhea (Marengo B&B and I would so recommend them, they are not on the route proper but are super accommodating about the pick-up/drop-off) back to where I finished yesterday – which actually was not in Glenosheen proper but in the little carpark at the mountain bike trailhead just up the way. So I started by strolling down to town and then headed on from there, enjoying all manner of sights along the way. 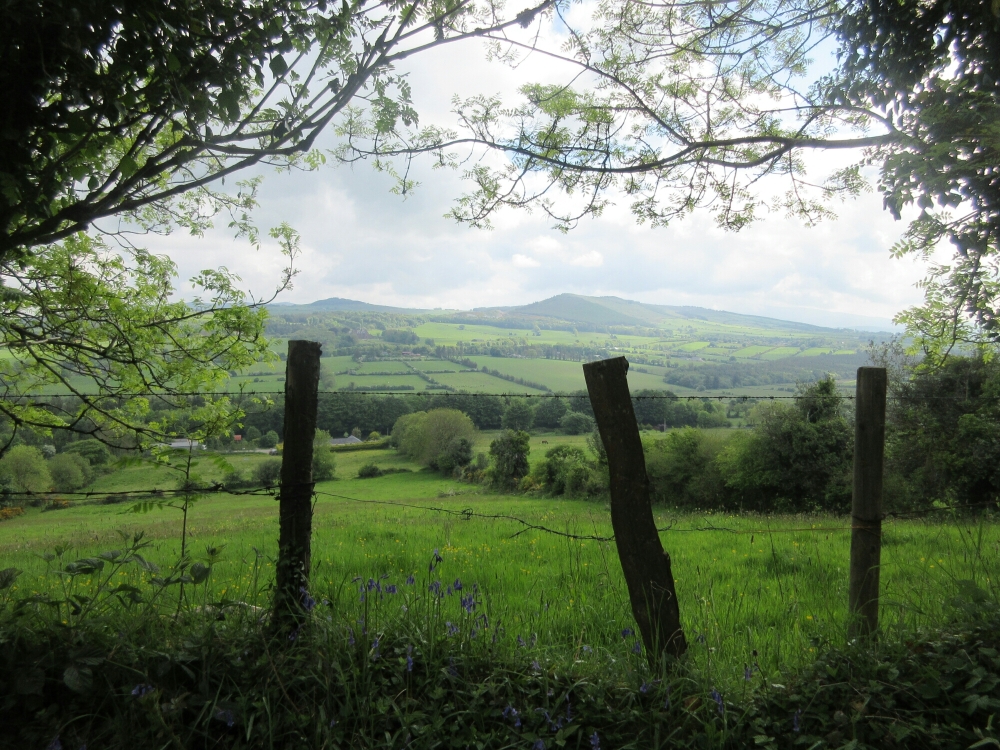 Castleoliver, which two sisters had built during famine times as a renovation on their older mansion and also reputedly as a means of driving some employment 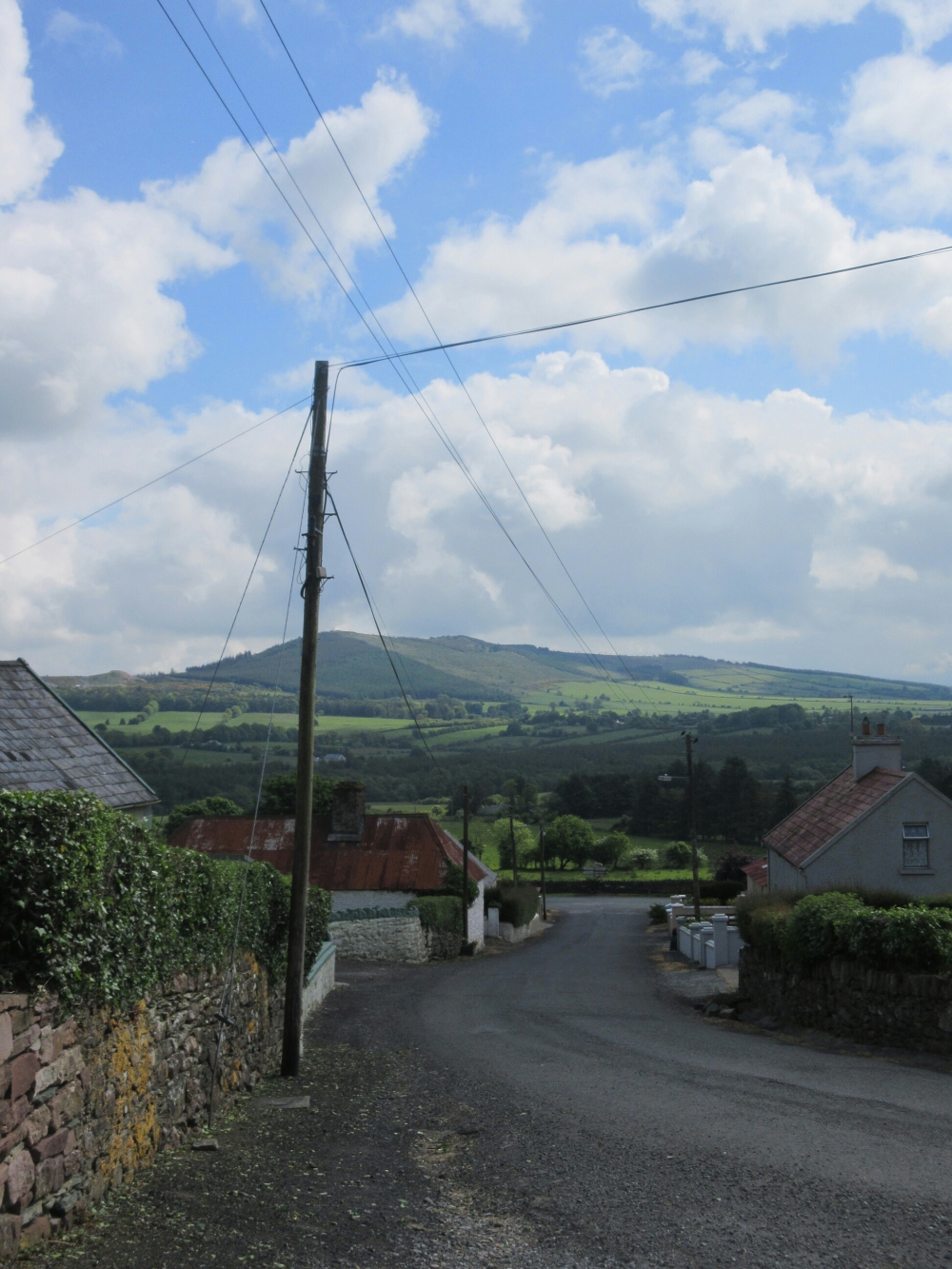 And here we are in Glenosheen, apparently the former home of some famous Joyce brothers who had a lot to do with Irish parklands, I think? Neither was the author you might be thinking of though

Signs and stunning views over at Slieve na muc, where I will be in a couple days 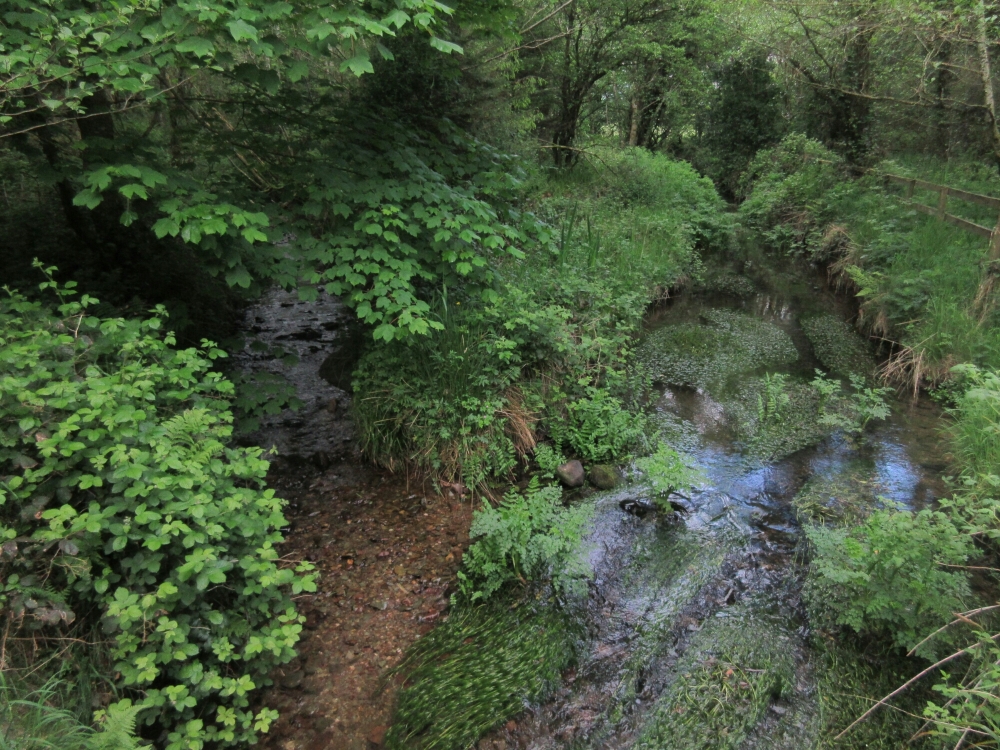 With ferns in them!

As I walked along through the forest, I really started to really feel the fact that no one was with me. I could walk as slowly as I liked through the trees; I could stand there and take half a dozen photos of random aquatic weeds in the stream without holding anyone up. Even the most patient and gracious trail companion is a human being, complete with their own pace and priorities, and to totally ignore those things feels rude no matter how much they say they don’t mind. But now…

Now I could just do my thing, and it was pretty much great.

I mused on this as I emerged out of the woods into the grounds of Ballyhoura Forest Homes, which seem like nice places to chill out given their proximity to that exceptionally pleasant bit of woodland (also I imagine they are probably the reason that bit of trail was so impeccably kept up). As I emerged from their drive, I once again savored my newfound ability to linger without slowing someone else down by spending a good five minutes ooohing and aaahing and shutter-snapping at a field of flowers – someone had gone to town with the wildflower seed mix or somesuch and I couldn’t argue with the results. 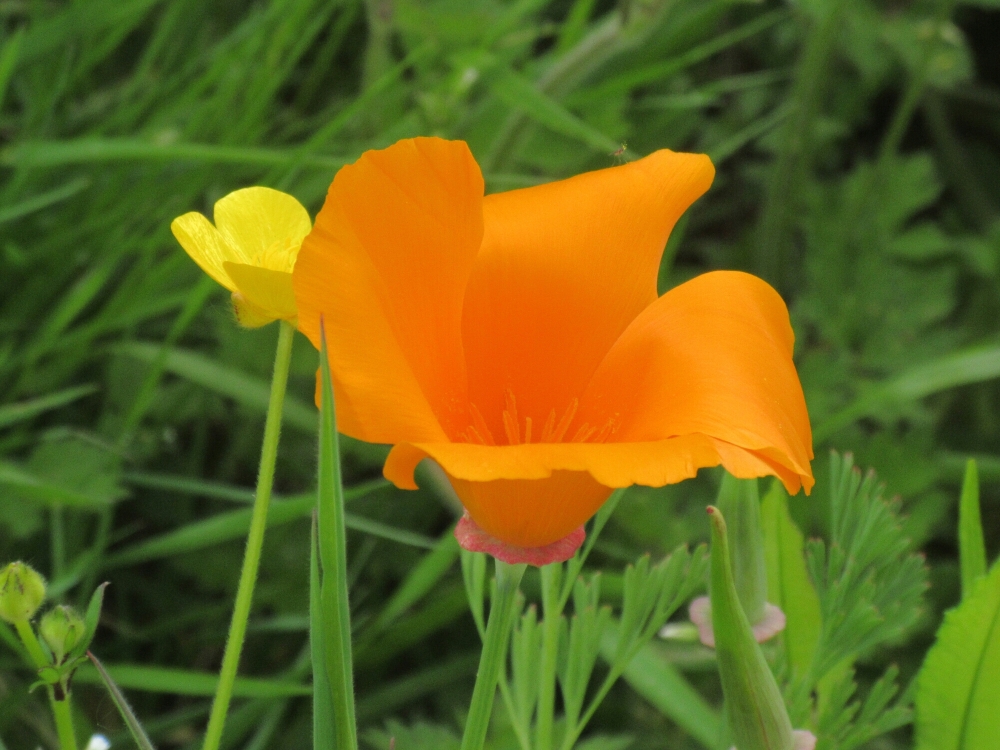 Finally I got my butt back in gear, and got on the trail again, only to wander right back off to go take a peek down into Ballyorgan – a town not actually on the trail but it was right there and it was early in the day so I had plenty of energy and time.

They had a church as well as some fascinating info placards

And then after I got going again, next it was this thing stopping me:

I mean you’ve got to have a look at that 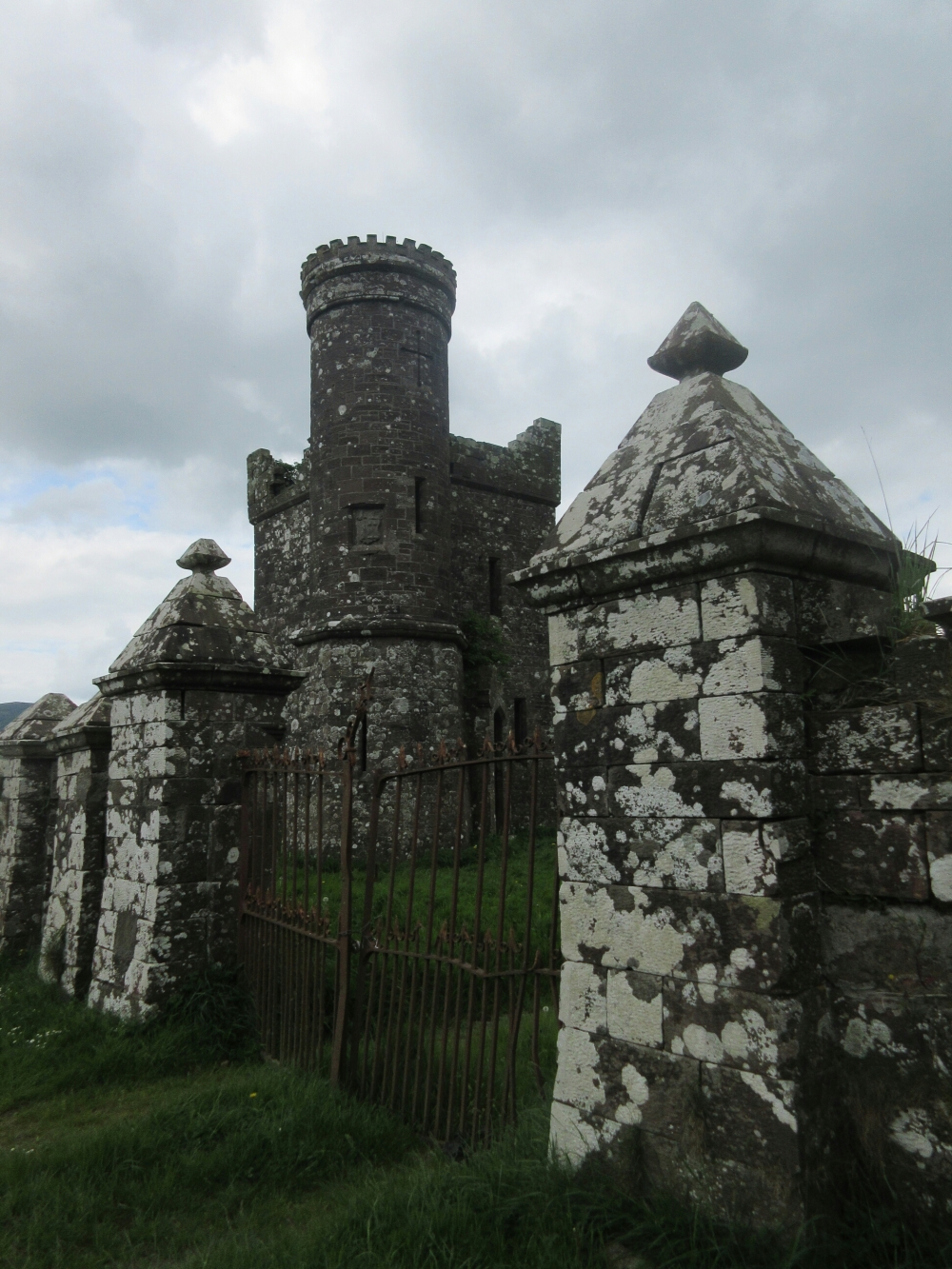 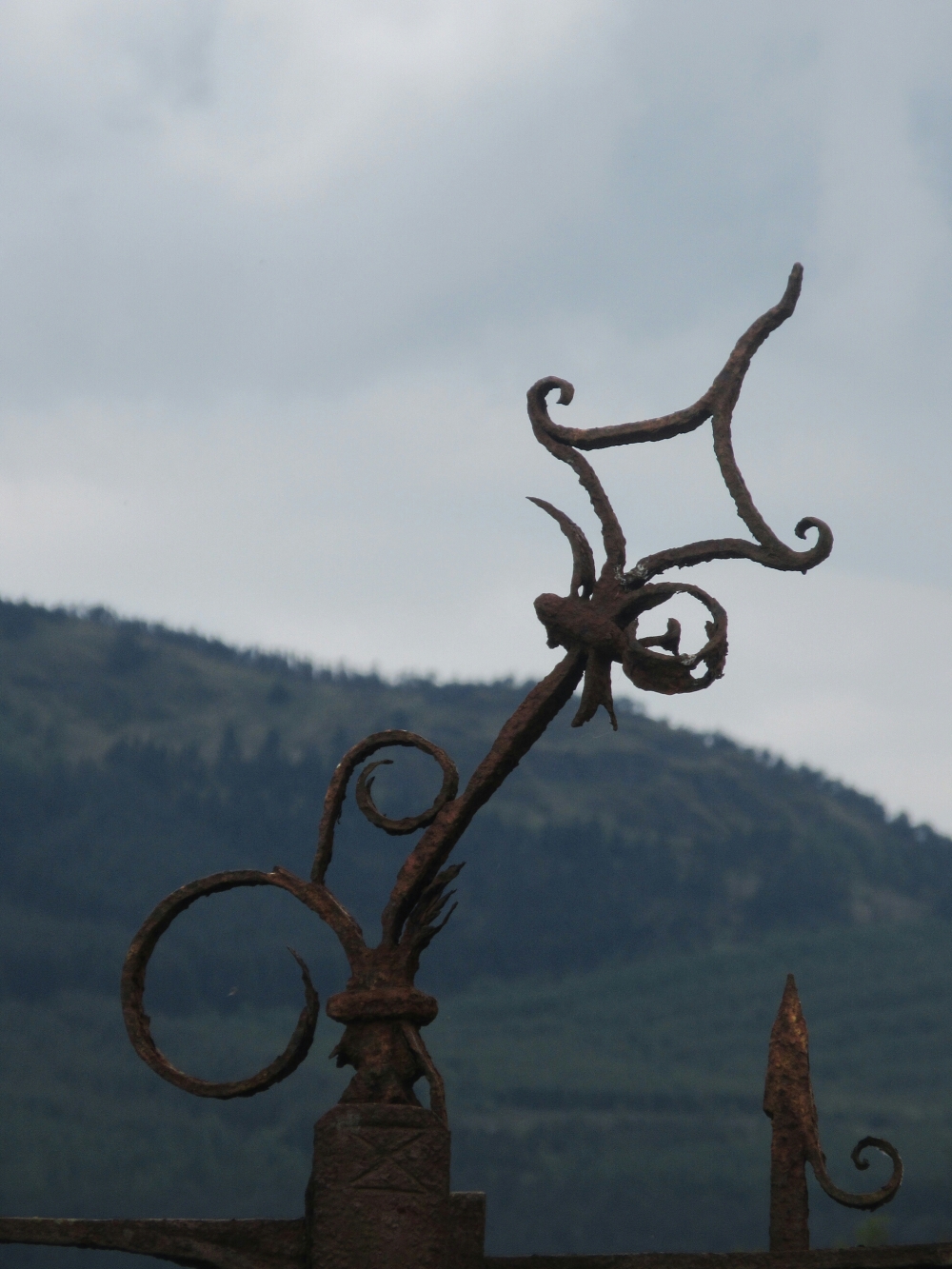 They had a cool hood ornament I mean gate ornament? or something? though

And so it went, as I cheerfully savored the ability to indulge a squirrel-like attention span with zero guilt.

Look feathers somebody had a tussle I imagine

Views back at the Ballyhouras

Look at the sunlight and shadow on that field

These trees looked to me a bit like a cannonade

Such a promising patch of darkness up there 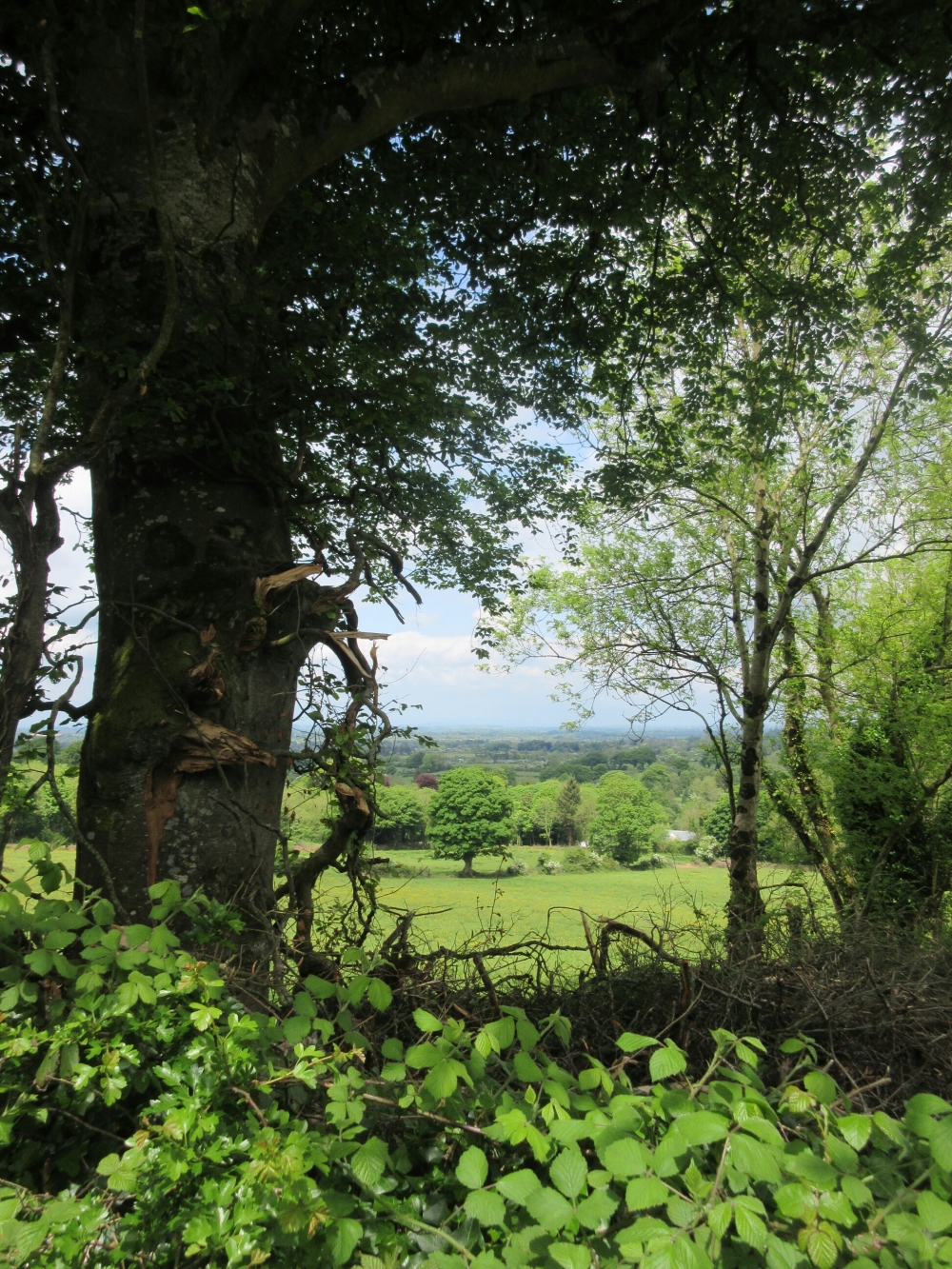 Eventually I arrived in the town of Kilfinnane which, as the name would indicate, boasted a rather nice church – I could see it as I approached town. First, however, I grabbed myself some grub – then I found my way over to the churchyard… (continued in next post)